Labor Day weekend was filled with champagne cheers emojis, Taylor Swift serenades, seaside escapades, and girl talk galore. One of my best friends, Kristen, came to visit me in the San Francisco Bay Area to celebrate my birthday! It was a fabulous 3 days filled with time for bonding, exploring, and embracing California. We made an effort to avoid uber-touristy areas, so I could show Kristen a slightly more adventurous side of the San Francisco Bay Area. For those of you that don’t mind braving tourist sights that come with highly concentrated ares of humans, I salute you. But if you’re looking for out-of-the-ordinary adventure, read on!

This park is nestled in the Santa Cruz Mountains, a 1.5 hour drive south of San Francisco. They have a ton of different trails – from a three-day hike that takes you to the sea to a 0.6-mile redwoods trail for the efficient tourist. Big Basin is one of the best spots to see old growth coastal redwoods, and you beat the crowds and craziness of Muir Woods! We hiked the Slippery Rock trail. It took us up the side of the mountain, where we found a great photo opportunity on top of a freshly fallen tree. We then descended down the trail, narrowly avoiding a tiny snake, to a tiny waterfall with the most beautiful blue water.

Our next stop was Carmel-by-the-Sea, an insanely cute coastal town with homes that make you feel as though you’ve stumbled into an enchanted village from your favorite fairy tale. Our afternoon at Carmel-by-the-Sea included sauntering past jewelry storefronts (with window displays boasting several quarter-million dollar rings) and popping into delightful bakeries and swanky restaurants– all just a few blocks from the California surf and sun. Kristen and I nibbled on pizza and prosecco at a place called Little Napoli, which reminded us of our time exploring Milan!

Truly a gem of a spot. Point Lobos in only a few minutes south of Carmel-by-the-Sea. It’s the perfect place to stroll through Cyprus trees perched on sea cliff walls and marvel at the rock formations or draw into a moment of peace with the world. We made it to Point Lobos around sunset and took a short walking path to the sea. To our surprise, we found a colony of sea lions chattering loudly on the coast against a backdrop of hungry breaching whales circling a school of unsuspecting fish. Nature at its best!

The town of Tiburon is just north of San Francisco, and the Tiburon bay sits directly across from the Golden Gate Bridge. A family friend owns a house on the water and we graciously accepted his invitation to spend the day kayaking and paddle boarding. We cruised on the water near the San Francisco Yacht Club (which surprisingly isn’t actually in San Francisco) and enjoyed the occasional harbor seal poking its head out to say hello! Tiburon has a stunning view of the city on a clear day and a great downtown with a ferry that goes to Angel Island and the San Francisco Ferry Building. 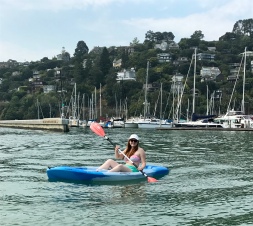 Determined to uphold a traveling tradition Kristen and I began a few years ago, we made a reservation for afternoon high tea at the Fairmont Hotel. Here we dined in their Laurel Court restaurant. The grandiosity of this hotel is something to behold. In the lobby, striking marble pillars dare your eyes to look up and marvel at the ornate gold gilded ceilings. I have found childhood memories of watching this space transform into a two-story gingerbread house during Christmas time. The hotel sits right across from Grace Cathedral and next to the Top of the Mark, two other great SF spots to visit. 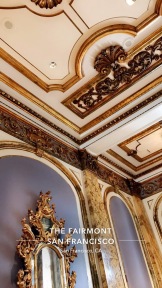 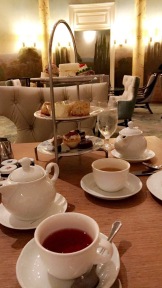 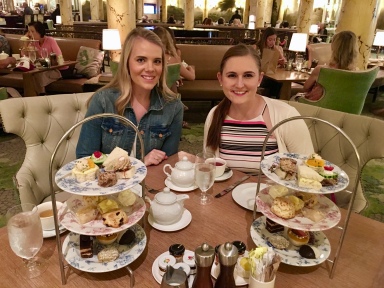 California was colonized in the 1700s by Franciscan priests who established a system of 21 missions and military outposts, originally intended to spread Christianity among the local natives. The areas they settled in have become some of the largest cities California is known for today including Santa Barabara, San Diego, San Francisco, Santa Cruz, and San Jose. Mission San Francisco is the city’s oldest standing building– with four-foot thick walls that have withstood the earthquakes– and is definitely worth a visit! The Mission District also has gorgeous murals and unique bakeries to eat at!

Haight Street
Haight street embraces the San Francisco of the 60s and 70s – hippie clothing galore, your friendly neighborhood anarchist bookstore, hemp and cannabis dispensaries, Buddhist zen trinket stores, and just about everything you can think of that is distinctly not very Noelle (I’ll stick to preppy blazers and Starbucks), BUT it is a pretty cool place nonetheless. Kristen and I found a quaint little bookstore with all kinds of curiosities and eccentricities we could have gotten lost in for hours if we didn’t have so many other sites to see!

Lands End
This is hands-down my favorite spot in San Francisco. Land’s End is a short coastal hike on the north-west end of the peninsula, which provides a stunning view of the Golden Gate Bridge and Marin Headlands. You can take a trail down to the beach, or over to a rock labyrinth on the cliff, and head on over to the Cliff House for lunch or dinner after your hike.

This site uses Akismet to reduce spam. Learn how your comment data is processed.